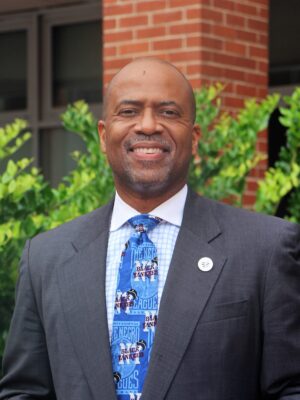 Professor Jay Augustine joined the faculty of North Carolina Central University Law School, as a visiting assistant professor, after serving as an adjunct member of the faculties at NCCU and Southern University Law Center. During his 15-years of experience as a legal academic, Professor Augustine has published articles in leading interdisciplinary law journals, written books on reconciliation and social justice, and been active in high-profile voting rights and school desegregation litigation. He is also deeply engaged in the community, actively serving on several national, state, and local boards and commissions.

As an active scholar on issues like immigration reform, environmental justice, and voting rights, Professor Augustine’s academic articles appear in publications including the Connecticut Public Interest Law Journal, Hastings Race & Poverty Law Journal, Louisiana Law Review, Loyola Law Review, University of San Francisco Law Review, and the Southern California Interdisciplinary Law Journal. His article on appellate practice and procedure, featured in the Louisiana Bar Journal, was cited by the Louisiana Supreme Court in published opinion and his thought leadership on mending America’s racial and political divisions is detailed in his book, Called to Reconciliation: How the Church Can Model Justice, Diversity and Inclusion (Baker Academic, 2022). Professor Augustine is also under contract, in completing another interdisciplinary book, When Prophets Preach: Leadership and the Politics of the Pulpit (Fortress Press, 2022).

An experienced litigator and member of the Louisiana State Bar Association, Professor Augustine is also admitted to practice law before several federal courts, including the U.S. Court of Appeals for the Armed Forces and the United States Supreme Court. While serving as of counsel with the Southern Coalition for Social Justice, he co-authored an amicus curie brief filed with the Supreme Court in voting rights litigation, Brnovich v. Democratic National Committee (2021). He has also been lead counsel in several school desegregation cases, including Carter v. Tangipahoa Parish School Board, a case where he successfully achieved unitary status, that was originally filed by Thurgood Marshall, prior to his appointment to the United States Supreme Court. Additionally, as an expert in canon law, Professor Augustine is an elected member of the Judicial Council (Supreme Court) of the African Methodist Church. He also serves the denomination locally, as the senior pastor of St. Joseph AME Church in Durham.

A committed community activist, Professor Augustine is the general chaplain of Alpha Phi Alpha Fraternity, Inc., a silver life member of the National Association for the Advancement of Colored People, and a member of the Board of Directors of PartnersGlobal. He also serves, under gubernatorial appointment, from North Carolina Governor Roy Cooper, as a member of the Andrea Harris Social, Economic, Environmental and Health Equity Task Force.

The Keys Are Being Passed: Race, Law, Religion and the Legacy of the Civil Rights Movement. (Houston, TX: ROM Publishing, 2014). https://www.amazon.com/gp/product/B00KLNSEZO/ref=dbs_a_def_rwt_hsch_vapi_taft_p1_i0

“And When Does the Black Church Get Political?: Responding in the Era of Trump and Making the Black Church Great Again,” 17 Hastings Race and Poverty Law Journal 87 (2020). https://repository.uchastings.edu/hastings_race_poverty_law_journal/vol17/iss1/4/