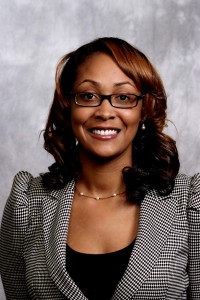 Carol C. Chestnut is a native of Tabor City, N.C. She earned her undergraduate degree from the University of North Carolina at Chapel Hill (UNC); she received her bachelor’s degree with a major in Communication Studies with a concentration in Rhetoric, and a minor in Social and Economic Justice. She then attended UNC School of Law where she received her J.D. in 2005. In 2008, Chestnut became licensed by the North Carolina Board of Law Examiners (NCBLE) to practice law in North Carolina.

In April 2008, Chestnut joined the School of Law as an Administrative Support Associate in the Faculty Services Office. She worked with the Faculty Services Office for one year before transitioning into the position of Interim Law School Registrar in July 2009. Her primary role involves maintaining academic records and managing registration. She works closely with faculty and other academic administrators in developing, explaining, and enforcing academic policies. In addition, she collaborates with other administrative offices to serve students and faculty. Chestnut’s role spans both the academic and administrative sides of the School of Law, making it a priority to be able to contribute to institutional goal-setting.